Every year I take a ‘big trip’ to somewhere. In 2019 I’d finally go to Alaska. I’d been dreaming of Alaska for decades, but never quite felt ready to take the plunge and wander the vastness of the last frontier.

Ben and I were attempting to figure out a destination we hadn’t both recently visited. Last year, it was a two week 2000 mile road trip from Boise, ID > Yellowstone NP > Glacier NP > Waterton Lakes NP Canada > Grand Teton NP > SLC, UT, ruling out a huge chunk of the country. Ben and I both used to live together in CO, so wandering there was also out of the question.

I had 2 weeks of vacation burning a hole in my calendar, so I sent Ben a text:

All he said back was:

A month before the trip, I was diagnosed with mono. We had originally planned to do a lot of backpacking and other physical activities, but it was clear I wasn’t going to have the energy during the trip.

The Alaska trip turned into a road trip. Nights in a hotel wasn’t in our budget, and improved paid sites weren’t really in our budget either, so we decided to sleep in the back of the rental SUV. It turned out to be a wonderful experience and a perfect first peek into the vastness of Alaska.

We landed after a long day of flying with a stop over in Seattle and made our way with all of our gear to pick up our rental: an all wheel drive Traverse.

Then we went straight to Walmart and REI to get the following:

Once we got to Denali State Park, we put our packs together and hiked about 2 miles to cabin #3 at Byers Lake. We were already pretty tired, so it was a little extra exhausting, but totally worth it. If we were to do it all again, though, I’d want to stay in a hotel or sleep in the car the first night instead. I would absolutely go back to the cabin, especially if we had a few days to explore the area.

After a morning of hiking and an afternoon of mono sleeps, we spent our second night was spent at the Bear Creek Rest Stop north past Healy. The most impressive part of Alaska for me is that we could camp anywhere. Rest areas often included campgrounds, and in places that aren’t marked otherwise, its fine to sleep in a vehicle. We were able to camp for free most nights.

After a quick shower at Denali National Park, we drove south toward Cantwell to hop on highway 8, otherwise known as the Denali Highway.

The Denali Highway is an improved dirt road leading east west from Cantwell to Paxson. Its a delightful drive with views of glaciers and mountains to the north. Towards the middle, the surrounding area tinted red with a kind of vegetation I had never seen before. It was very beautiful.

There are several pull offs and plenty of camping in this road. After several stops for photos, we turned south at the end of the Denali Highway and drove on to Paxson Lake.

We had originally planned to keep driving and head all the way to Nabesna Road, but we were tired and it was getting late, so we settled into a cozy campsite at Paxson Lake to enjoy the rest of the day relaxing at the lake. After a few days of constant driving, it was good to stop early.

The McCarthy Road heads almost 60 miles from Chitina towards McCarthy-Kennicott, a town in the Wrangell-St. Elias National Park, the largest national park in the USA. It doesn’t reach Kennicott, so if you want check out Kennicott or hike to Root Glacier or the mine trails, you need to pay for a shuttle. One way takes 2 hours so plan accordingly since you’ll need another 2 hours to get back to camp after a long day of hiking.

Camping at McCarthy Campground fills up very fast, so we didn’t stay there. We spent one night at a the Copper River campground near the confluence of the Copper and Chitina Rivers and another night at a roadside rest area like campground at Liberty Falls State Recreation Site on the Edgerton Highway (Alaska 10).

From McCarthy Road, we drove back through Chitina to Kenny Lake where we did laundry, took showers, and stocked up on more food and fuel. We ate much needed burgers at Ken’s Bistro.

The drive to Lake Louise State Park is a little wild with the paved road waving up and down. Its rough in a way that I had never seen before. Permafrost is hard on pavement.

According to our campground hosts, this park always has campsites available.

We drove back on highway 1 through Anchorage onward to Kenai Fjords National Park. The change in scenery was dramatic as we entered a more humid environment.

This area is absolutely beautiful. All we had seen so far was breathtaking, but something about the Kenai Peninsula really struck us as something special. For a quicker trip to Alaska, heading down to Seward would make for a great stay.

The campground where we intended to stay has a rule against camping inside vehicles, so we stayed at a pull off on road close to the park.

Daily life consisted of waking up, making breakfast and heading out. We used backpacking cooking gear since taking a larger stove on a plane seemed unnecessarily bulky considering all of the other things we needed for the trip. When I would predictably get tired, we could easily pull over and climb into the back for a nap. 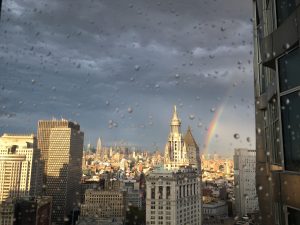